Come with me as I travel around England


Do you love rural England? Then you have come to the right website ! There is so much to love, the people, the history, the literature, the comedy, the countryside, even the weather! We moan when it rains but without all that water England would not be the green and luscious country she is. We should be grateful for the rain and for the mist that rises from the watercourses in early morning, and the fog which covers our rolling hills. These things, though sometimes inconvenient, give England its special character. This certainly is a magical land, a place of much legend and mystery.

But can I drink the water? This is the first thing visitors to any county need to know. So the short answer is yes, but you might not want to. So to help you I've written an article to answer this important queston. Can you drink British tap water?


After more than fifteen years, travelling in Europe I finally realised how much I was missing England. So from about 2005 I started making frequent visists back to the country of my birth, the home of my ancestors, and here is a photographic account of my rediscovery of England. (for those of you who keenly follow my travels, this was several years before the start of my canal boat adventures). Please be patient as this account unfolds over the coming months as I resore my deleted pages (see About Me). Thank you.


England was not formed in a day and I shall not rediscover it in one either. My journey will take me to all corners, coastal and inland, this is exciting! Later I will return here for several years, linging the nomad lifestyle onm a can boat, but more of that later. For now, in the early years of the 21st centry my visits are less frequent.


I never have liked cities so my focus here will be on Rural England.


Here is a little bit of background for those who may need it. England became a unified country during the 10th century and takes its name from the Angles, the largest of a number of Germanic tribes who settled in England in the fifth and sixth centuries, and who are believed to have originated in the peninsula of Angeln, in what is now Denmark and northern Germany. (The further etymology of this tribe's name remains uncertain, although a popular theory holds that it need be sought no further than the word angle itself, and refers to a fish-hook-shaped region of Holstein). The early 8th century historian Bede, in his Historia ecclesiastica gentis Anglorum (Ecclesiastical History of the English People), refers to the English people as Angelfolc (in English) or Angli (in Latin). 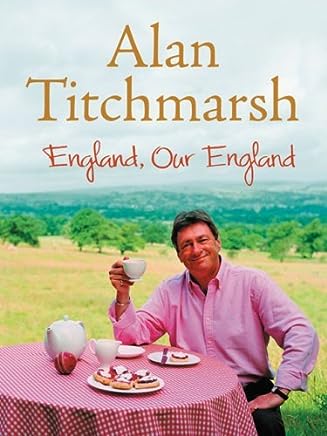 England Our England
by Alan Titchmarsh


England occupies a total area of 50,346 sq miles / 130,395 square kilometres and currently supports a population of somewhere between 49,138,831 (2001 census) and 55 million (updated for 2019). You may think that is way too many prople on a small island with limited resourses and I may well agree but I will try not to get too political in this blog.


The capital of England is London, which is the largest urban area in Great Britain. England is one of the world's most influential and far-reaching centres of cultural development. It is the place of origin of both the English language and the Church of England. England was the world's first parliamentary democracy and consequently many constitutional, governmental and legal innovations that had their origin in England have been widely adopted by other nations. Indeed English law forms the basis of the legal systems of many counties. London is the centre of the British Empire. As if that wasn't enough, the country was the birthplace of the Industrial Revolution and England was the first country in the world to industrialise. England is home to the Royal Society, which laid the foundations of modern experimental science. 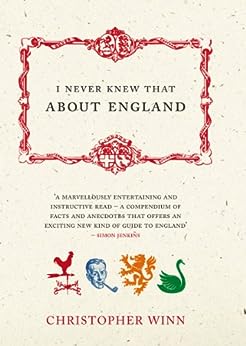 I Never Knew That About England
by Christopher Winn


The Kingdom of England was separate from the rest of the UK until 1st May 1707, when the Acts of Union resulted in a political union with the Kingdom of Scotland. The Principality of Wales was already annexed to England by the Statute of Rhuddlan in 1284, and it was legally incorporated into England by the Wales and Berwick Act 1746, making laws passed in England automatically applicable to Wales. This was reversed by the Welsh Language Act 1967, which gave Wales a separate identity from England. Since then, legal and political terminology refers to "England and Wales".


England comprises the central and southern two-thirds of the island of Great Britain, plus offshore islands of which the largest is the Isle of Wight. It is bordered to the north by Scotland and to the west by Wales. It is closer to continental Europe than any other part of Britain, divided from France only by a 24 mile / 52 km sea crossing. The Channel Tunnel, near Folkestone, directly links England to the European mainland. The English/French border is halfway along the tunnel.


Most of England consists of gently, rolling hills, but it is more mountainous in the north with a chain of low mountains, the Pennines, dividing east and west. The dividing line between terrain types is usually considered to be in a line between the Rivers Tees and Exe. There is also an area of flat, low-lying marshland in the east, the Fens, much of which has been drained for agricultural use.

The Strange Laws of Old England
by Nigel Cawthorne


The list of England's largest cities is much debated because in English the normal meaning of city is "a continuously built-up urban area"; these are hard to define and various other definitions are preferred by some people to boost the ranking of their own city. Some people insist that a city must have a cathedral. Of course London is by far the largest urban area in England and one of the largest and busiest cities in the world. Birmingham is the second largest, both in terms of the city itself and its urban conurbation. A number of other cities, mainly in central and northern England and the Midlands, are of substantial size and influence. These include: Manchester, Leeds, Liverpool, Newcastle, Sheffield, Bristol, Coventry, Bradford, Leicester and Nottingham.


The largest natural harbour in England is at Poole, on the south coast. Some regard it as the second largest harbour in the world, after Sydney, Australia, although this fact is disputed.


England has a temperate climate, with plentiful rainfall all year round, though the seasons are quite variable in temperature. However, temperatures rarely fall below -5&#176C. (23&#176F.) or rise above 30&#176C. (86&#176F.). The prevailing wind is from the south-west, bringing mild and wet weather to England regularly from the Atlantic Ocean. It is driest in the east and warmest in the south, which is closest to the European mainland. Snowfall can occur in winter and early spring, though it is not that common away from high ground. <br><br><br> The highest temperature ever recorded in England is 38.5&#176C (101.3&#176F) on August 10, 2003 at Brogdale, near Faversham, in Kent. The lowest temperature ever recorded in England is -26.1&#176C (-15.0&#176F) on January 10, 1982 at Edgmond, near Newport, in Shropshire. <br><br><br> The major rivers of England are the Severn (the longest river basin in Great Britain), Tees, Thames, Trent, Humber (Until 1998, the Humber Bridge was the longest suspension bridge in the world), Tyne, Wear, Ribble, Ouse, Mersey, Dee, Aire, and Avon. <br><br><br> England has a vast and influential culture that encompasses elements both old and new. The modern culture of England is sometimes difficult to identify and separate clearly from the culture of the wider United Kingdom, so intertwined are its composite nations. However, the traditional and historic culture of England is more clearly defined. Added to that England has recently been flooded with newcomers, a few of whom are adamant on breaking the first rule of travel <em>Let each new country change you, never try to chang it. It is the newcomers' responsibility to fit in with the established population</em>. In our eagerness to welcome all comers we have lost sight of the essential difference between multi-ethnic and multi-cultural. Sorry, I wasn't going to get political, was I? </p> </div> <br><br><br> <div align="center"> <p> <a href="https://www.amazon.co.uk/England-My-Treasury-Things-English/dp/1907554491?tag=wiccaninternatio&linkCode=w13&linkId=&ref_=assoc_res_sw_zz_dka_cra_t0_result_1&ref-refURL=http%3A%2F%2Fmavericksbigadventure.com%2FEngland%2Findex.php" target="_blank"> <img border="0" src="https://images-na.ssl-images-amazon.com/images/I/51yHTG0tI7L._SX324_BO1,204,203,200_.jpg" width="150" height="235"></a> </a> <a href="https://www.amazon.co.uk/England-My-Treasury-Things-English/dp/1907554491?tag=wiccaninternatio&linkCode=w13&linkId=&ref_=assoc_res_sw_zz_dka_cra_t0_result_1&ref-refURL=http%3A%2F%2Fmavericksbigadventure.com%2FEngland%2Findex.php" target="_blank"> <img border="0" src="Graphics/PoundSign.jpg" ></a> <a href="https://www.amazon.com/s?k=England%2C+My+England+Gerry+Hanson&ref=nb_sb_noss" target="_blank"> <img border="0" src="Graphics/DolarSign.jpg" ></a></a> <br> England, My England: <br> A Treasury of All Things English <br> by Gerry Hanson </p> </div> <div align="justify"> <p> <br><br><br> <a target="_blank" href="http://www.english-heritage.org.uk/">English Heritage</a> is a governmental body with a broad remit of managing the historic sites, artefacts and environments of England. London's British Museum, British Library and National Gallery contain some of the finest collections in the world. <br><br><br> The English have played a significant role in the development of the arts and sciences. Many of the most important figures in the history of modern western scientific and philosophical thought were either born in, or at one time or other resided in or we educated in England. Major English thinkers of international significance include scientists such as Sir Isaac Newton, Francis Bacon, Charles Darwin and New Zealand-born Ernest Rutherford, philosophers such as John Locke, John Stuart Mill, Bertrand Russell and Thomas Hobbes, and economists such as David Ricardo and John Maynard Keynes. Karl Marx wrote most of his important works, including Das Kapital, whilst in exile in Manchester, and the team that developed the first atomic bomb began their work in England, under the wartime codename <em>tube alloys</em>. <br><br><br> </p> </div> <div class="sharethis-inline-share-buttons"></div> <br><br> <div align="center"> <a href="https://mavericksbigadventure.com/England/20110730.php"> <img border="0" src="Graphics/MoreAdventures.jpg" ></a> <br><br> <a href="http://mavericksbigadventure.com"> <img border="0" src="Graphics/Back.jpg" ></a> <br><br> </div> <br><br> </div> <div align="center"> <div align="center"> <br><br> <hr width=75%> <br> All the photographs on this page are copyright Jack Cox, all rights reserved, <br> however you are very welcome to use them on your own website, <br> free of charge, in exchange for a backlink. Other rights also available <a href="https://mavericksbigadventure.com/LicenceMyPictures.php">Click here</a> for details. <br><br> <hr width=75%> <br><br><br><br> <iframe src="https://rcm-eu.amazon-adsystem.com/e/cm?o=2&p=26&l=ur1&category=kindle_unlimited&banner=08NHYWFW74MASY9FZE02&f=ifr&linkID=12ca21d2aecf8f901f42286d1a0b1e79&t=wiccaninternatio&tracking_id=wiccaninternatio" width="468" height="60" scrolling="no" border="0" marginwidth="0" style="border:none;" frameborder="0"></iframe> <br><br> <script charset="utf-8" type="text/javascript"> amzn_assoc_ad_type = "responsive_search_widget"; amzn_assoc_tracking_id = "wiccaninternatio"; amzn_assoc_marketplace = "amazon"; amzn_assoc_region = "GB"; amzn_assoc_placement = ""; amzn_assoc_search_type = "search_widget"; amzn_assoc_width = "auto"; amzn_assoc_height = "auto"; amzn_assoc_default_search_category = ""; amzn_assoc_default_search_key = ""; amzn_assoc_theme = "light"; amzn_assoc_bg_color = "FFFFFF"; </script> <script src="//z-eu.amazon-adsystem.com/widgets/q?ServiceVersion=20070822&Operation=GetScript&ID=OneJS&WS=1&MarketPlace=GB"></script> <br><br> </div> </div> <script type="text/javascript"> var vglnk = {key: '22efe006b8d459004536956014d62b01'}; (function(d, t) { var s = d.createElement(t); s.type = 'text/javascript'; s.async = true; s.src = '//cdn.viglink.com/api/vglnk.js'; var r = d.getElementsByTagName(t)[0]; r.parentNode.insertBefore(s, r); }(document, 'script')); </script> </body> </html>