sits alongside the Staffs & Worcs Canal in England

Radford Meadows Nature Reserve, on the southern outskirts of Stafford in the English Midlands, is a rare surviving example of a traditional flood meadow. It is managed by Staffordshire Wildlife Trust.


What better way could there be to view the reserve than to take a leisurely stroll along the towpath of the Staffs & Worcs Canal in July.


At this time of year the banks are rich with meadowsweet and there are several good viewpoints from which to appreciate the reserve without disturbing the wildlife. Indeed access into the reserve itself is only permitted to guided groups.


This 56 hectares site is a natural flood meadow. Indeed I saw it completely flooded just a few weeks ago. I was passing on the A34 but unfortunately didn't have a camera with me at the time.


The Meadows form part of the River Penk floodplain. The Penk is a small tributary of the River Sow, which joins with the River Trent at Great Haywood, so the waters flowing through the reserve eventually drain into the North Sea at the Humber Estuary.


The Penk begins its 36 km (22 mi) journey in Tettenhall Wood east of the village of Perton, not far from Wolverhampton.


The Penk flows north to the market town of Penkridge, and then on to the village of Acton Trussell, both places now blighted by noise pollution from the M6 motorway. My heart goes out to the poor people who have to live with that. Fortunately I will only have to spend a few days passing through.


But I digress. The Irish say that the cares of tomorrow must wait 'till this day is through and right now I'm enjoying my time here.


The nature reserve is the long strip of pasture immediately to the west of the canal. It runs south from Radford Bridge, on the A34, as far as Deepmoor Lock.


Floodplains, sometimes called 'washlands', play an essential role in managing flood waters. Drain them and build on them at your peril.


I remember watching TV documentary once. This lady was standing in the ruined kitchen of her new house, berating the fact that the builder had told her the site never floods. You couldn't help but feel sorry for her.


Then the cameraman went outside to get some location shots. There was a small river, just a few feet away, with a post marking the hight of the water level in different years. That site floods regularly and this homeowner had been too stupid to do her homework.


Flood meadows soak up excess water during times of high rainfall. Never ever build on them and when people do, for crying out loud have the sense not to buy those houses.


For most of human history people have lived in harmony with this natural process, grazing their cattle on the lush summer pastures that have been enriched by the winter flooding. Indeed there is a herd of fat cattle on the reserve right now.


This system has also created a wonderful wetland for wildlife, especially birds.


But now people seem to have lost the wisdom of their ancestors. Many floodplains have indeed been drained in the vain pursuit of so-called agricultural "improvement" or for even worse, for urban development.


Land drainage has a long history in Britain, going back to Roman times, when they cut the Car Dykes in the Fens and the ditches of Romney Marsh.


The industrial revolution drove a fresh urgency for greater agricultural yields and even more land was drained.


The Dutch were experts at this so their methods were employed in Britain. Radford Meadow suffered extensive damage at the hands of these Dutch engineers in the 18th century. But it has been luckier than many places. Thanks to Staffordshire Wildlife Trust, the drainage has now been stopped and groundwater levels are on the rise again.


One of the reserve's main attractions is a small clump of one of England's rarest trees, the Black Poplar (Populus nigra)


This a broadleaf, deciduous tree is native to the UK and Europe. It is a true relic of the floodplain woodland that once dominated lowland England.


The bark is dark brown but often appears black, and is thick with numerous fissures and burrs. The somewhat lumpy twigs are brown in colour.


The leaves are shiny, green and heart-shaped, with long tips and a mild scent of balsam. Young leaves are covered in fine, tiny hairs, which they shed by autumn.


Black poplars are dioecious, meaning the male and female flowers are found on separate trees.


The male catkins are red while the female ones are yellow-green. They are wind pollinated.


Once fertilised the female catkins develop into fluffy cotton-like seeds, which fall in late summer.


In an effort to restore more natural conditions on this part of the floodplain, a number of dams have been built which will help to retain floodwater within the reserve.


A series of shallow pools, or scrapes, have been excavated to re-create the muddy conditions loved by feeding waders and wildfowl.


By providing the right habitat and keeping the site wetter at critical times of the year, the conservation team at Staffordshire Wildlife Trust hopes to encourage lapwing, redshank and snipe to breed here again. They will be monitoring the effect of the works over the next few years, but hopefully one day the sound of snipe, drumming to attract mates, will be heard across the flood meadow once again.


Today I saw lots of lapwings, a heron, Canada geese, mallard, a flock of black headed gulls and a solitary Little Egret. In addition I think I saw an oystercatcher but it was too far off to be certain. It's a funny thing about lapwings but I went years without seeing one, until I came to Staffordshire and now they are everywhere. Admittedly I was out of the country for most of that time but even so ...


Well it's been an enjoyable afternoon but what a strange one. There's just one cloud in the otherwise blue sky. It's about the size of a football pitch, maybe two. And there's hardly any wind. Even way up high, hardly any wind. Just the faintest breeze blowing gently westward.


Blowing the one cloud gently westward. And the earth gently turning, making the sun appear to be moving slowly westward at exactly the same speed as the cloud. And the sun has been behind that same damn cloud all afternoon. Bummer!


It poked it's nose out briefly at about five o'clock and most of the photos on this page were taken in that final half hour.


Now off for a bite to eat at the Radford Bank Inn. 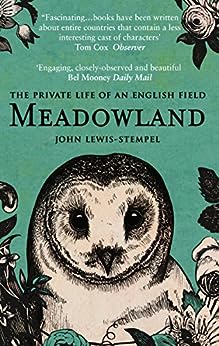 Meadowland:
the private life of an English field
by John Lewis-Stempel